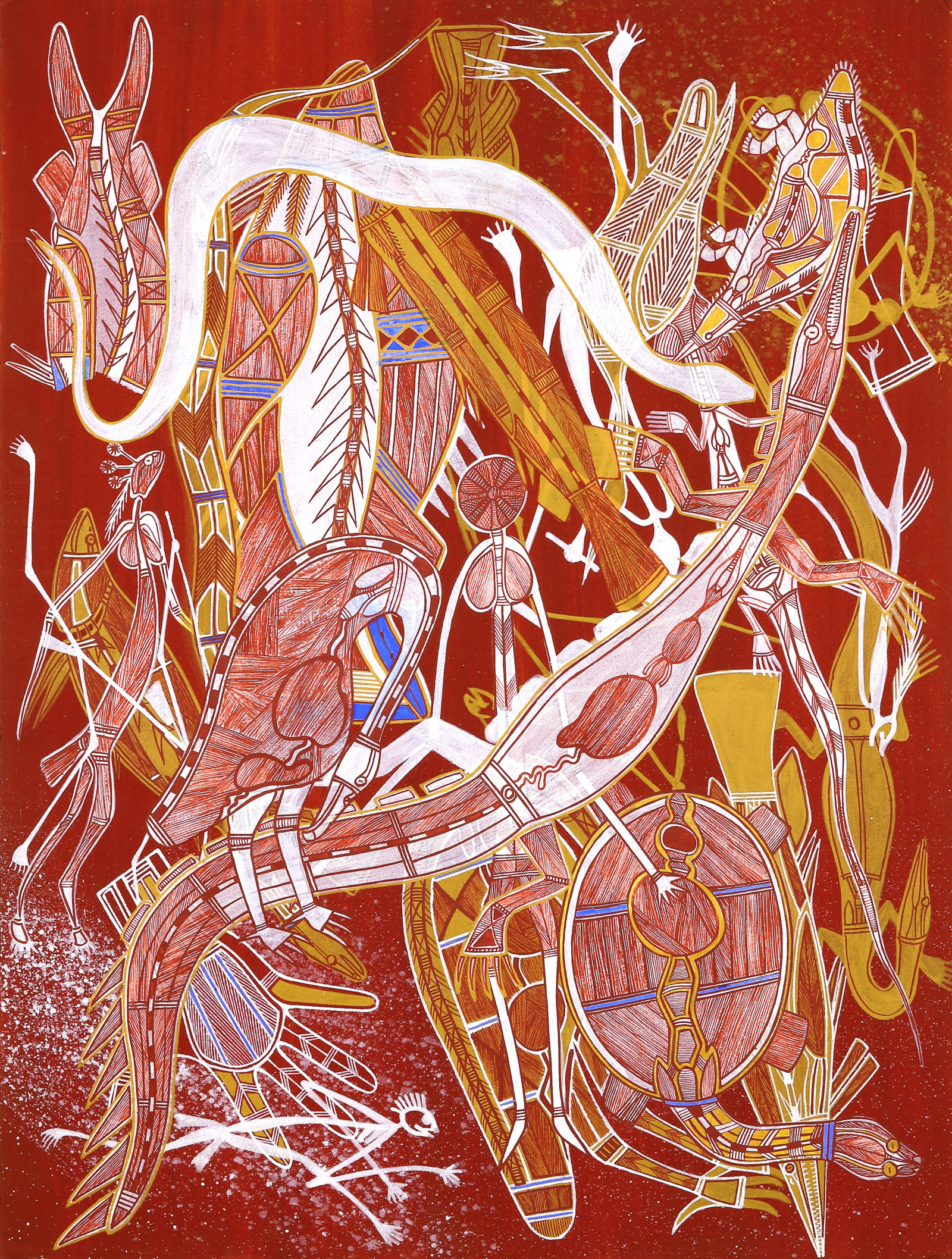 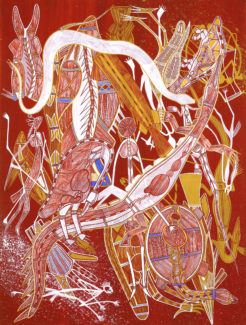 This exhibition featured six paintings on paper from Injalak Arts in Arnhem Land, Australia. It was exhibited in the Upper West Oval Room of the Rotunda at the University of Virginia.

In September 1990, the American businessman and philanthropist John W. Kluge was approached with a proposal to commission forty-five works on paper by the leading artists of the newly formed Injalak Arts and Crafts Association. This would become Kluge’s second major commission of Indigenous Australian art and represented a critical turning point in the art of the region.

Located in the Aboriginal community of Kunbarlanja in western Arnhem Land, Injalak Arts took its name from an imposing hill adjacent to the community. Adorned with painted images dating back over 40,000 years, Injalak Hill contains some of the most concentrated and spectacular rock art galleries in the world. Throughout the twentieth century, artists at Kunbarlanja drew inspiration from these images to create paintings on eucalyptus bark for trade with anthropologists and collectors. Initially founded as a screen-printing workshop for young artists, it did not take long before Injalak Arts transformed into an inter-generational epicenter for Kunwinjku painting. Under the watchful tutelage of elders such as Bardayal Nadjamerrek, Peter Nabarlambarl and Thompson Yulidjirri, the art center became a vibrant space of cultural transmission, teaching, and learning through art.

The Kluge commission was the first time that many of the artists at Injalak had worked on paper. The scale and flexibility of paper created new possibilities, which the artists embraced creating images of unprecedented complexity and narrative flair. In the decades that followed, paper would become one of the most commonly used supports among Kunwinjku painters. In 1997, Kluge donated thirty-one of the works from the commission to the University of Virginia. These remain a cornerstone of the Kluge-Ruhe Aboriginal Art Collection. This exhibition presents five works from the original commission, alongside two newly commissioned works by the contemporary artists Joe Guymala and Gabriel Maralngurra.

In 1992, Maralngurra, the then president of Injalak Arts, wrote that his hope for the future was that those who viewed these paintings would “develop a greater understanding of Aboriginal culture, our relationship to the Dreaming, and the creation of our clan lands.” For Indigenous Australians, art has always been central to the process of teaching and learning. Shown here in Thomas Jefferson’s Rotunda, Munguyhmunguyh is an affirmation of our shared commitment to broadening the scope of traditional pedagogy. In commemorating three decades since John W. Kluge’s Injalak commission, we pay tribute to the power of one of the world’s oldest continuous artistic traditions while celebrating the ongoing relationship between UVA and Injalak Arts.

This exhibition and the artist visit of Gabriel Maralngurra and Joe Guymala have been sponsored by the Kluge-Ruhe Aboriginal Art Collection of UVA, the UVA Parents Fund, the UVA Arts Council, the Embassy of Australia and the Mapping Indigenous Worlds Lab of the Institute of Humanities and Global Cultures.