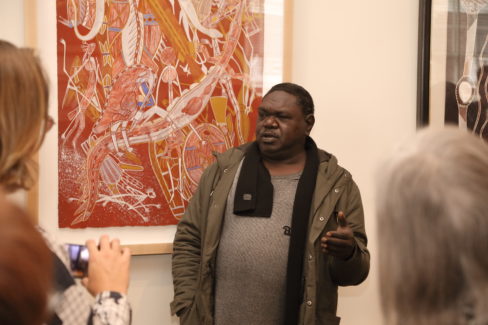 I feel proud that I’m sharing this painting, of myself and my people. Here in Gunbalanya and for the rest of the world to hear the stories which will never be forgotten. – GABRIEL MARALNGURRA

In this webinar, Mellon UVA Indigenous Arts Fellow Gabriel Maralngurrra will discuss the long history of art in his homelands of Western Arnhem Land. Rock art of the region shows a continuous history dating back over 50,000 years. Maralngurra will explore the continuing relevance of this history to contemporary artists at the Injalak Arts center, of which he is co-manager. In considering the role of Injalak in strenghtening Kunwinjku art and culture, Maralngurra will take us on a journey through the art, country and culture of Western Arnhem Land.

Gabriel Maralngurra is a founding member of Injalak Arts, a cooperative of Indigenous artists from the Aboriginal community of Gunbalanya in northern Australia which was formed in 1989 to promote Kunwinjku art and culture. As an artist and educator, he is a driving force behind the art center, which he currently co-manages. As a painter and printmaker, his work encompasses a wealth of subject matter, from ancestral narratives, plants and animals, through to imagery of early colonial encounters. Inspired by the extensive rock art of his homelands, his work is characterized by its confidence and fluidity, as well as its restless innovation. Maralngurra takes seriously his role in educating both Indigenous and non-Indigenous people in Kunwinjku culture. This role has seen him travel widely throughout Australia and the world. In January 2020 he undertook a residency at the University of Virginia to coincide with the launch of The Inside World: Contemporary Aboriginal Memorial Poles at the Fralin Museum of Art. His work is held in the Kluge-Ruhe Aboriginal Art Collection, the National Museum of Australia, the National Gallery of Victoria and the British Museum.

This webinar is supported by the Mellon UVA Indigenous Arts Program and Injalak Arts.